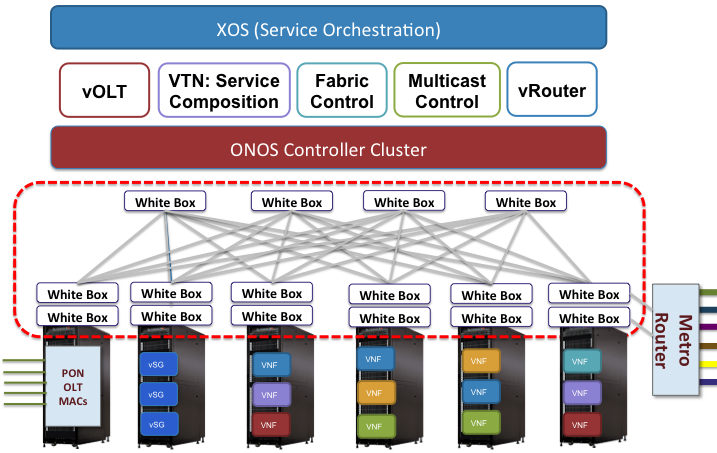 Services in CORD are composed using the best practices of Cloud operations. In CORD, services are instantiated by the network operator using XOS (Figure 5). In turn XOS presents ONOS with a service graph for subscriber traffic. This graph is then decomposed into flow-rules that are programmed in the CORD networking infrastructure by the VTN application in ONOS. Details of XOS and service graphs are discussed in other design notes. This section gives a brief overview of the implementation choices made for realizing service composition in the network infrastructure.

In CORD, service composition is implemented using overlay-networks and network virtualization. At a high level,

Fabric Operation as an Underlay 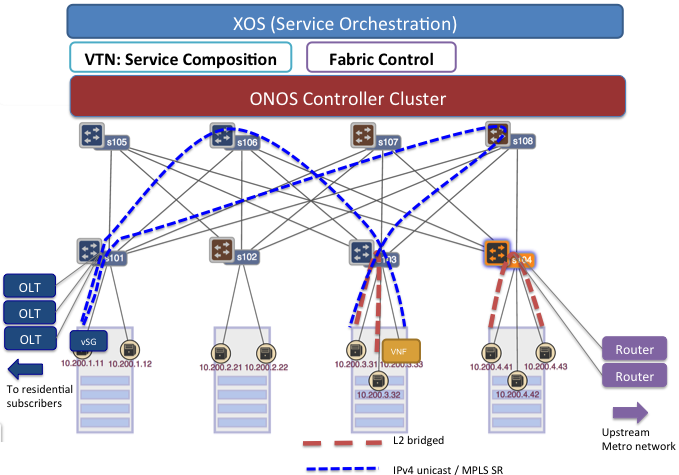 Figure 7. Fabric as an underlay.

With reference to Figure 7, each rack has its own subnet 10.200.x.0/24. Servers in the same rack are assigned (infrastructure) IP addresses in the same subnet (for example 10.200.1.11 and 1.12 in rack 1). Traffic between these servers is bridged by the ToR (leaf switch) they are connected to (s101 in Figure 7). Traffic destined to another rack gets routed by the same ToR. Here we use concepts from MPLS Segment Routing, where we attach an MPLS label to designate the ToR switch in the destination rack, and then hash the flows up to multiple spines. The spines do only MPLS label lookups to route the traffic to the destination ToR. A packet walk-through is shown in Figure 8.

The fabric design choices come out of a desire to have forwarding separation between edge and core (in this case the leaves and spines). Ideally, for a multi-purpose fabric, it is best if the core remains simple and ‘same’ for all use-cases, and only the input to the core changes on a per-use case basis. In our case, this means that the core forwards traffic only on the basis of MPLS labels, whereas the input at the leaf switch can comprise of IPv4, or IPv6, or multicast, or MAC, or VLAN, or VLAN+MAC or QinQ or even other MPLS labels. 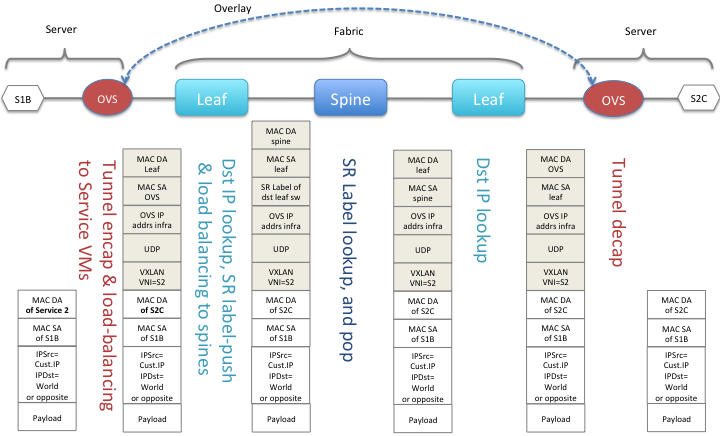 The fact that we use MPLS labels to achieve this edge-core (leaf-spine) separation is immaterial. We could have just as well used VLAN tags. However in our experience with current ASICs, it is easier to use labels instead of tags, as they are treated differently in current ASIC pipelines and there are different rules to follow and associated limitations in usage.

Furthermore, Segment Routing is just a convenient way to use MPLS labels. SR gives us the concept of globally significant labels which we assign to each leaf and spine switch. This leads to less label state in the network, compared to traditional MPLS networks where locally-significant labels have to be swapped at each node. In addition, by default, SR requires the use of ECMP shortest paths, which fits well with the leaf-spine fabric, where leaf switches ECMP hash traffic to all the spine switches. Finally, SR is source-routing, where we can change the path traffic takes through the network, by simply changing the label assignment at the source (leaf) switch - there is only one switch to ‘touch’ instead of the entire ‘path’ of switches. This is how we have performed elephant-flow traffic-engineering in the past using external analytics [REF].

In addition, an overlay/underlay architecture simplifies network design, as it introduces a separation of concerns - the underlay hardware fabric can be simple and multi-purpose without knowing anything about virtual networks, while the overlay network can be complex but implemented in software switches where more sophisticated functionality like service-chaining and distributed load-balancing can be achieved. Importantly, this architecture does not mean that we cannot have the overlay and underlay network interact with each other and gain visibility into each other. This is especially true in an SDN network where we have the same controller-based control plane for both overlays and underlays.